A little praise to imagination

The following text is a contribution from alumni Edda Kruse Rosset, who has in 2020 co-founded Kaospilot+ Berlin, the home of the Kaospilots in the German capital. Kaospilot+ Berlin is a learning platform for design, meaningful entrepreneurship, activism and positive change and collaborates with Kaospilot around creating new innovative educational formats, to bring the Kaospilot pedagogy and philosophy into the world. Regular input from our partners will illustrate some current perspectives & reflections alive in other Kaospilot locations.

During a trip to Denmark I visited members from my Kaospilot Team 24. In their living room I skimmed, a usual habit of mine, their colorful bookshelf. My attention got caught up with by the title „From What Is To What If“. The author of the oeuvre, Rob Hopkins, is mostly known for being the co-founder of the Transition Town movement, that has sourced in Totnes/Devon, from where it then inspired communities worldwide aiming at increasing self-sufficiency, and reduce negative consequences of climate change and economic instabilities. In 2019, during a systemic leadership project in Oxford, we visited Devon, where you also find the inspiring Schumacher College, and my friend bought this book directly from the author. 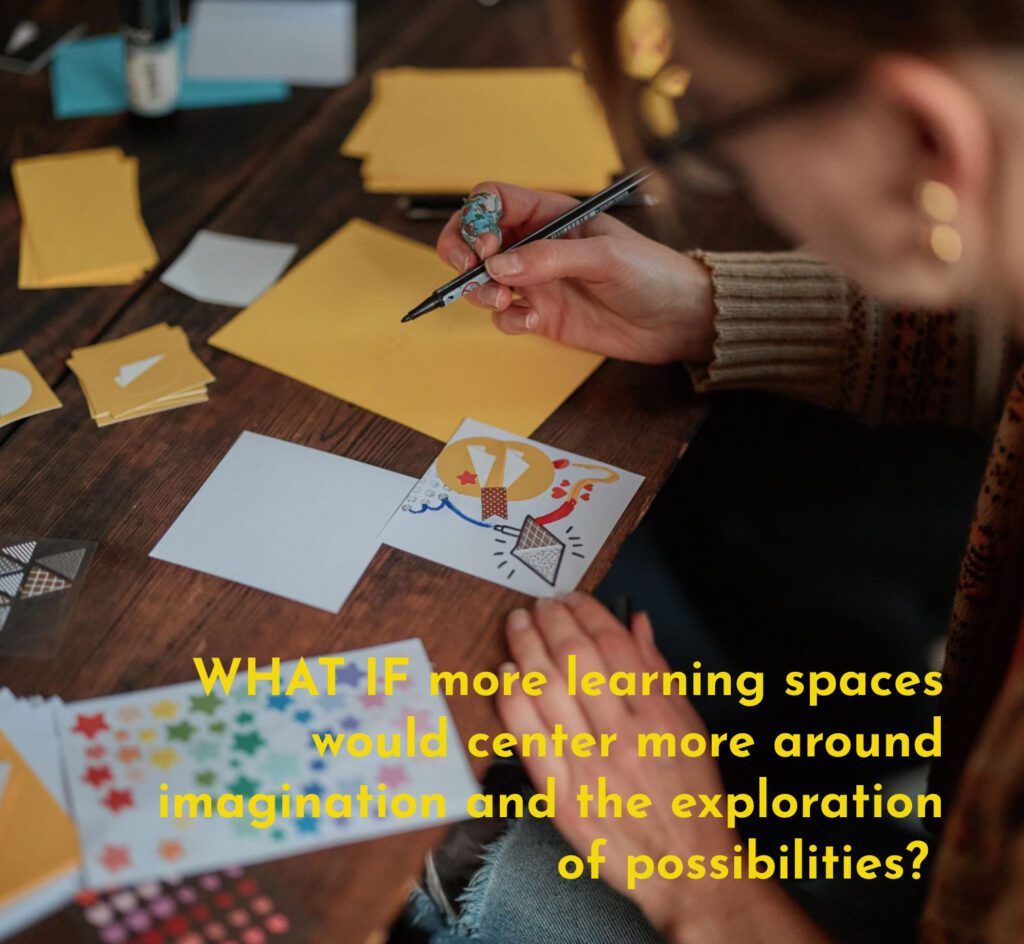 What if we used our imagination muscle more, is basically what Rob Hopkins asks us in it. He outlines that though we’re experiencing the current state of the world as a grim disaster (which it also truly is, maybe especially these days!), we simultaneously have the incredible potential to create and change, moving beyond experiences of disaster, and our most critical tool for that is our imagination. ‚What if‘ we asked ‚what if‘ more?

In the words of some of the many practitioners and researchers quoted in the book, our contemporary crisis is (also!) one of imagination. Stress, the number one health challenge of the 21st century, may just as well be be an expected result and response to a world going mad. And stress, amongst other conditions, affects our ability to imagine and to dream. The more we fear, and lose our dreaming practice in states of anxiety, the harder it gets to return to that practice.

What a nightmarish vicious circle! Now, as we are in the most challenging decades and need nothing more than our imagination as a practice to evolve our capacity to creatively adapt to states of a world ahead, but not imaginable yet, it seems like the exact thing we need – the practice of imagining the not yet imaging – is what’s incredibly tenacious, hardly impossible to play out.

As I read this whilst being in the company of fellow Kaospilots, people with whom I’ve experienced how to learn to imagine and put into practice what we didn’t believe possible before, I realized, again, how Kaospilot is for me truly a ground for hope – because its a space for dreams and impossibilities to become possible.

Only the fewest educational contexts I’m aware of give such a prominent invitation to learners to foster and nourish their imagination. At the Kaospilots, imagination is one of the core abilities students are to practice.

Kaospilot is certainly one of the places that has allowed me to shed lights on what’s possible. Here I’ve found a community that encourages me and others to live the ‚what if‘. A community that supports one another to do so.

What if we had simply more what if’s?
What if more learning spaces would center more around imagination and the exploration of possibilities?
What if more people learned like Kaospilots?

It’s possible and  I look forward to that!

Think less and do more!

The Art Of Imperfect Action

Think less and do more!

The Art Of Imperfect Action

WORKING WITH THE MUNICIPALITY

WORKING WITH THE MUNICIPALITY

The Netflix of Online Courses on Sustainable Development

The Netflix of Online Courses on Sustainable Development

The future looks bright, go out there and create it.

The future looks bright, go out there and create it.

The Future of Online Learning

The Future of Online Learning

Cowboy Number One and His Problems

Cowboy Number One and His Problems

Gazza at the Controls

Why Do We Fail?

Why Do We Fail?

How to Avoid Failure

How to Avoid Failure

Mindsets that will support you and your organization

Designing for a Transformation Economy

This is Chené Swart – A Narrative Therapist

This is Chené Swart – A Narrative Therapist

The role of an Experience Designer

The role of an Experience Designer

Including and Unleashing Everyone

Including and Unleashing Everyone

About the power of Experience Design

About the power of Experience Design

The difference between a leader and leadership

The difference between a leader and leadership

I desperately try to innovate the concept of magic

I desperately try to innovate the concept of magic

How to become a leader?

How to become a leader?

How important is communication?

How important is communication?

How important is sustainability for leaders?

How important is sustainability for leaders?

CEO and Founder of NYC Salt

CEO and Founder of NYC Salt

Can anyone be a leader?

Can anyone be a leader?

The importance of innovation

The importance of innovation

How to design an experience?

Collaborators around the world

Collaborators around the world

What is sustainable design?

What is sustainable design?

How to create a safe learning space?

How to create a safe learning space?

What is experiential learning?

What is experiential learning?

Why is an entrepreneurial mindset important?

Why is an entrepreneurial mindset important?

How to work with sustainability development?

How to work with sustainability development?